It goes on to say that schools must treat all these clubs the same. So if other clubs are allowed the use of the PA system to make announcements, put up posters in hallways or classrooms or hold meetings during school hours, your school must allow your GSA to do the same. Furthermore, your school can not require students to have parental permission to participate in your GSA if they do not require it of all other clubs.

The Equal Protection Clause of the 14th Amendment of the US Constitution says that the government must treat all citizens equally under the law. This means that it is illegal for your school to treat one group of students differently from another just because of who they are.

If your schools let’s straight couples hold hands, they can not punish you for holding hands with your boyfriend or girlfriend. If students are allowed to take a date to the prom, your school must allow you to take a date of the same sex to prom as well.

First Amendment of the US Constitution

The First Amendment of the US Constitution gives you the right to freedom of speech and expression. It forbids the government and all of its agents, including public schools, from violating that right.

This means it is illegal for your school to prohibit you from talking about being gay at school, as long as you do not do it during class time.

Freedom of expression is usually carried over to things like your clothes, but your school must enforce the same dress code for everyone. So, if your school allows other students to wear t-shirts that express social or political views, they must allow you to wear gay pride shirts. As far as what you can wear to prom or graduation, the law is not very clear.

Freedom of speech also protects the right of school newspapers to print what they’d like. This right belongs to the school, however, since they pay for and publish the paper. The rights of student journalists vary by state.

Federal courts have ruled that your school must take action if students are being harassed on the basis of sexual orientation or gender expression. Your school is obligated by law to take steps to end the harassment and protect you.

If you are being harassed or bullied at school:

1. Tell your principal, assistant principal or counselor about each incident, every time.
2. Keep a log of every incident, including date, time, where it happened, who was involved, what happened, who saw it happen, whom you told and what was done.
3. If you or your parents send a letter to the school or school board, be sure to keep a copy.

Federal courts have ruled that your school can not reveal your sexual orientation to your parents, or anyone else, without your permission, even if you are out at school.

Adapted from the ACLU: What’s your problem?

ACLU-Know Your Rights as an LGBTQ Student 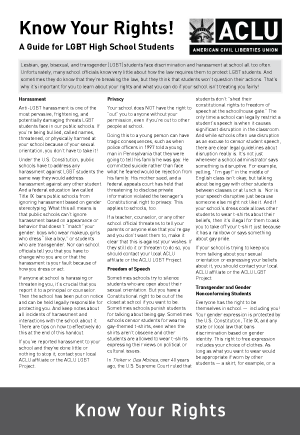 What Drives our Work

Blog entry: The school year has ended — but our work has not.